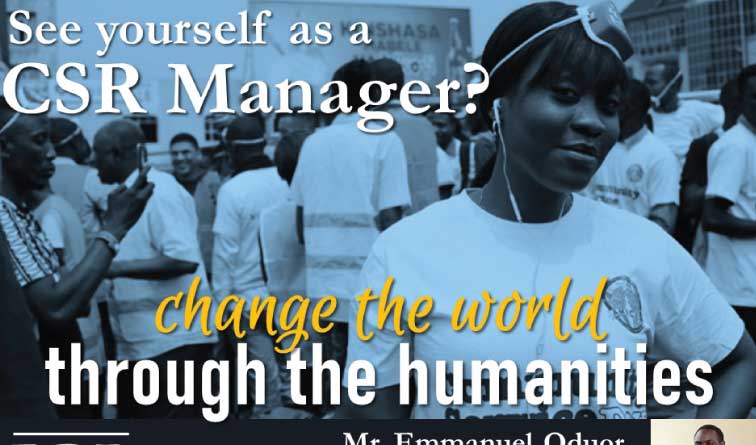 Do you see yourself working in CSR? A candid conversation with Mr. Emmanuel Oduor

Fifteen years ago, if you had asked Mr. Emmanuel Oduor, what other people thought of his decision to do a Bachelor of Arts degree, he would have painted a rather bleak picture. “Some say BA stands for ‘Baba Alinituma’ (my father sent me), meaning that you had run out of options after failing to make the cut for other prestigious courses like Engineering, Law and Medicine. And so your dad sent you to do whatever, so long as you ended up in university. Others say BA stands for ‘Bachelor of Anything’ and others even worse, ‘Being Around.’”

So why did Mr. Oduor, the current manager of Simba Foundation (a company of Simba Corp), stick with a course that others frankly considered worthless? Laughing away on a Friday afternoon at a Zoom meeting organised by the School of Humanities and Social Sciences, Mr. Oduor told us the secret to his perseverance. “I once relayed my misgivings about my course to Prof. Terry Ryan, a senior advisor of the Central Bank and former director of planning and national development in Kenya. He told me words that I will never forget: ‘To do a Bachelor’s of Arts degree and fail to get a job is a very surprising thing.’”

The reason is, as Mr. Oduor went on to explain, Arts and Humanities people are not overspecialised like their STEM counterparts. And in a dynamic economy and workplace as we have today, the ability to move between departments depending on the current needs is a great advantage in any company. A programmer, for instance, would not be HR’s first pick for the lead of a new product, team or marketing campaign. They are mostly specialised in doing only one thing, unlike the people who have an Arts degree. These latter show a great ability to be taught the widest range of skills.

Moreover, most companies now care little for the specificity of your degree. They just want to know if you can think for yourself and learn. They will train you on the technical skills later. He pointed out the trend that companies like KPMG and PWC have of hiring people from across university disciplines, even graduates from med school, then offering specialised training after they have moved you around various departments to assess your aptitudes. Mr. Oduor also mentioned that an Arts degree is synonymous with leadership training. From the beginning, you have to learn how to articulate and defend your ideas without the use of set formulas and algorithms. This is the stuff of life and so anyone who has done a BA should never feel intimidated.

The virtual meeting with Mr. Oduor that took place on January 8th wasn’t really about education in the arts. It was organised rather for a discussion on a career in Corporate Social Responsibility (CSR) and the latest trends in that field. The beneficiaries of this highly engaging and informative session were the students of Bachelors of Arts courses at Strathmore, specifically those studying Development Studies and Philosophy. Many of them found the opening remarks encouraging as they often have to justify the relevance of their course to friends, relatives and future employers.

So what is CSR all about? “When giving becomes a big thing, it has to be structured,” said Mr Oduor. Many companies have long felt the push to respond to a need in society. However, this response has also been seen as a way to improve the company’s public image, which is why CSR usually falls under marketing. Moreover, it tends to degenerate and lose its initial motive, turning out to be more about what you are seen to be doing rather than what you are actually doing. Each act of giving is preceded by a camera crew and journalists, who theatricise the before and after of the company’s ostentatious act of kindness. But theatrics aside, many companies want to ‘give back’ in a way that resonates with their company identity. This is where terms such as “strategic pillars” come in.

However, CSR is becoming a thing of the past. It is always a hole in the budget and the first casualty when companies have to downsize. That is why the trend is shifting to what experts call a “double bottom line.” It’s no longer just about profits and giving some of those away to the needy. Rather, it is a clever combination of profits and social impact, where businesses look for how they can create value for society while redounding on their profits; social projects that make business sense. It pays to do good to others, meaning that it’s now about “doing good for others while doing good for yourself.” This form of structured profitable giving is referred to as CSV, Corporate Shared Value.

Mr. Oduor explained that this is what Simba Foundation is doing. Simba Corp’s main business is the sale and maintenance of vehicles. That’s what they are good at, and they want to share this with society through a sustainable business model called Unda Future. It consists of partnering with private technical training institutions in automotive courses, where Simba offers scholarships and equipment to the training institutions, and then offers paid attachment and specialised training at their garages to those students who qualify. In return, Simba get a pool of selection for future mechanics, improve the standards in the automotive industry and also market themselves because the students constantly refer to “how things were done at Simba” and “the equipment only found at Simba”.

Unda Future and other similar initiatives, such as KCB’s Tujiajiri are not to be confused with CSI, Corporate Social Investment. This often antagonistic form of CSR is where companies offer scholarships to the needy in return for cheap labour once they are fully trained. The initial beneficiaries end up being bonded to the company that sponsored their education and are often paid less than those who educated themselves. They rarely complain because they feel a sort of need to show gratitude for the opportunity. But this merely propagates their disadvantaged beginnings and injures their esteem through the pressure to ‘give back in kind for what you received.’

CSV is hard to monitor because it is not a legal requirement for companies. So how can one measure its effectiveness and ensure its sustainability? Mr. Oduor talked about “B Certification”(akin to ISO certification) which measures the social impact of a company. It is now a greatly sought-after certificate and the company that offers it is B Corporation (https://bcorporation.net/). This tackles how to measure the external and internal social impact of a company. Internal because ‘charity begins at home’ and a company cannot be doing good to those outside without considering the welfare of its own employees.

What about sustainability? The beauty with CSV is that it heavily relies on partnerships of a contractual nature. Private firms partner to serve society profitably, and therefore put all the business expertise into monitoring the effectiveness of each other’s contribution to making the social ventures successful. Mr. Oduor gave the example of a joint venture between Adidas and Grameen bank: one of the world’s biggest shoe companies partnering with an award-winning micro-finance bank for the poor. “The idea was to expand Adidas’ market, while at the same time providing quality products to people who might not otherwise be able to get them,” as reported in a 2017 article of the Huffpost titled, “On maximising shared value.” Thus, both companies keep each other accountable and prevent such ventures from suffering sudden budget cuts or being shut down abruptly. Additionally, this way of doing CSV helps to promote “global partnership for sustainable development,” which is goal 17 of the UN Sustainable Development Goals.

The superlatives and grand vision that Mr. Oduor’s words opened up for the students eventually led to a desire to know some specifics. “How many people work for you at Simba Foundation?” a student asked. Mr. Oduor brazenly began his answer by saying, “I have a whole floor to myself!” He then added, “But Simba Foundation has only one employee; that’s me. So how do I run a multi-million-shilling branch of a big corporation without any staff? Well, that’s easy. Everyone is Simba Foundation. From accountants to lawyers, watchmen and cleaners, and of course the marketing crew; my job is to ensure that everyone participates in our social projects by offering their expertise. When we did a partnership with UAP Old Mutual Faulu to fund the technical training for mechanics, the accountants of Simba Corp helped me do the paperwork. It was their way of participating in our CSV. Afterwards, they went back to their usual work for the main corporation. And when we are giving out gift hampers in the slums, the drivers and mechanics help with the distribution. Indeed, everyone is Simba Foundation.”

Getting a job with an arts degree.

That answer may have dampened the prospects of some students to boldly ask for a job at the foundation right there and then. But one student plucked up the courage and wittily rephrased the question to, “how can one apply for a job at a foundation or anywhere else for that matter?” Again, chuckling away, Mr. Oduor gave a very brief but enlightening answer. “Start with your lecturers. They are your first professional network. They know you and how you work, meaning that they wouldn’t have any qualms of conscience recommending you to someone. But you have to make the first move and ask them for opportunities, especially if some of them are also practitioners alongside teaching.”

Mr. Oduor added that, “You have to build social capital. Find any excuse to deal with people you will work with in the future.” He gave a very witty last tip for those who make it to the interview stage, and want to give their best shot at securing the job. Mr. Oduor advised: “You have to be a politician!” He explained, “When I went for my first job interview, I was prepared for that part where they require you to ask a question to any of the interviewers. Mine was, ‘Would you like to know what I would do in my first 100 days?’ That’s when I gave them my grand vision of what I was capable of doing, just as politicians make promises of what they will do in their first 100 days of office. Only this time I was being honest,” he finished with a grin.

The meeting that lasted an hour and a half ended at 5.30pm with a parting shot from Mr. Oduor. “I would encourage you to be confident in what you are doing. Amass as much knowledge as you can in your studies. You are on the right track by doing a BA degree!

In summary, the take-away points for the students were: A degree in the arts is a training in leadership. Don’t be intimidated by other seemingly powerful courses because they mostly train people to do only one kind of thing, whereas you have received a training that allows you to excel in many areas. There is an abundance of money but a shortage of ideas on how to generate social impact, which is now a much sought after aspect of big companies. CSR is evolving into CSV, which needs people who can generate and execute ideas on how to form partnerships that create value for society while bringing in profits. Don’t wait to finish school; start building your professional networks, starting with your lecturers. And be a politician! 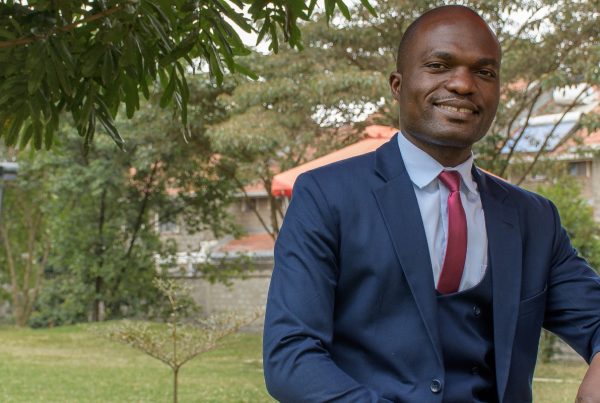 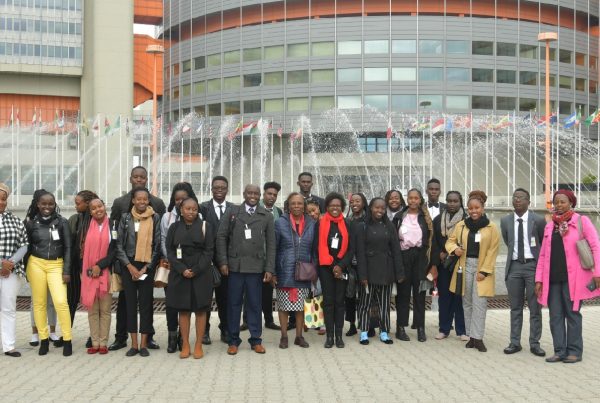